Move over NFC West. There’s a new sheriff in town.

For years the NFC West has been seen as one of the strongest in the league. The Rams, Seahawks and Niners have all reached the Superbowl in the last seven years and share five Superbowl appearances in nine years between them. The Cardinals also managed to reach the NFC Championship game in 2015.

While some divisions seemed all too predictable with the same teams dominating and others continuing to struggle, the NFC West continued to push each other to be better with any of the four teams seemingly capable of winning it each year.

The AFC West in contrast has become one of the more predictable divisions in the NFL in recent times. The Kansas City Chiefs have dominated and won the division for five seasons in a row, whilst the Broncos and Raiders have struggled, with neither managing a winning season since 2016/17.

So when i was putting together my annual sixfold bet of division winners, the Chiefs were understandably one of my more confident selections. So when Kansas City suffered their second loss in three games to start the season I became a little worried. On top of that, the Broncos and Raiders have come out flying and sit with 3-0 records to start the season.

So here I will be analysing each teams remaining schedule, predicting results and seeing where that leaves each team in the final division standings.

Despite the 3-0 start, there are still question marks around the Broncos. With a combined record of 0-9, their opposition so far has been poor. The Broncos couldn’t have been more convincing in dispatching them though. Week 4 also poses the biggest test so far with the Ravens travelling to Denver. I have them losing that game in a tight contest but bouncing back with wins at Pittsburgh and at home to divisional rivals Raiders.

The Raiders surprised a lot of people when they took down the Ravens in week 1. They backed that up with professional wins against the Steelers and Dolphins. With a remaining strength of schedule of 0.500, the Raiders have plenty of opportunities to add to their win tally.

Ultimately the deciding factor in the final standings rests largely on how these teams do against each other in their divisional matchups, and I have the Raiders going 1-5. This will end up costing them not only the division title but also result in them losing out to the Broncos for the final wild card spot. 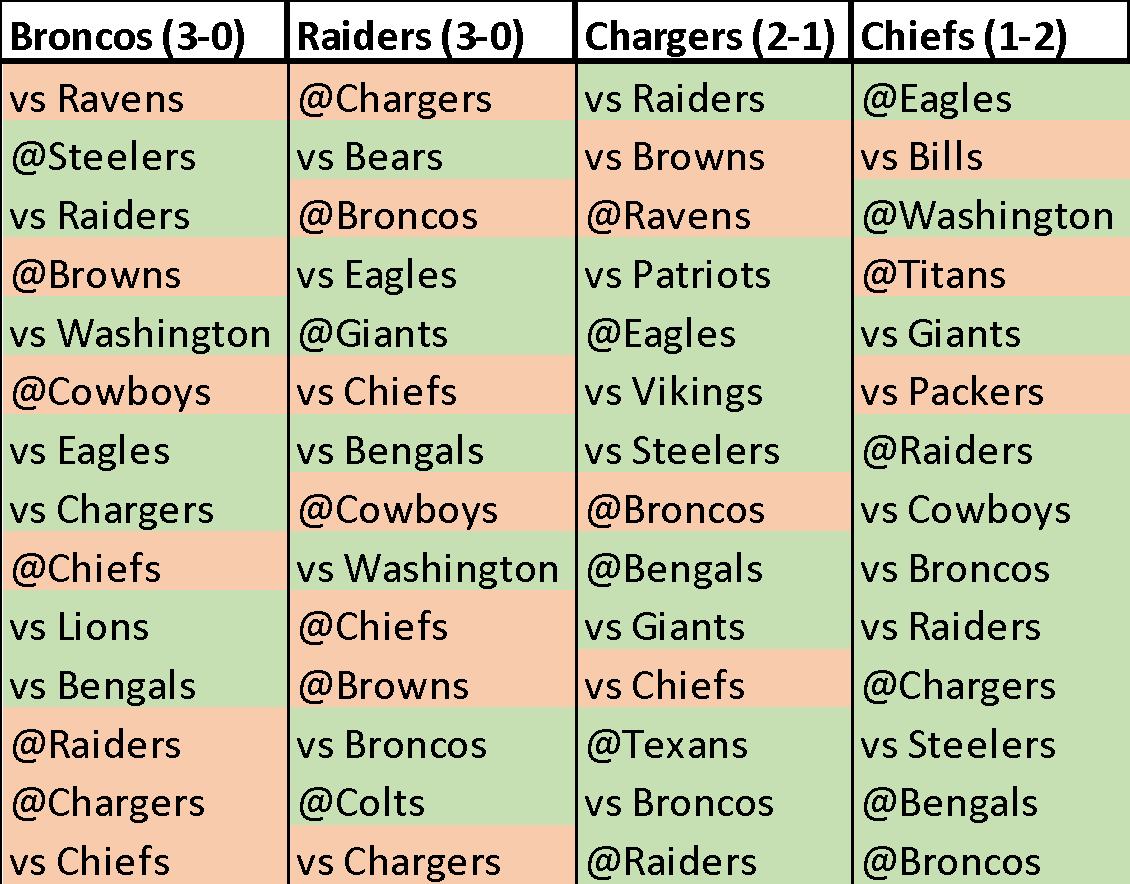 The Chargers will have been disappointed to lose a close game with the impressive Cowboys in week 2, but more than redeemed themselves with a enthralling win over rivals the Chiefs. That win will have given them the belief they can beat anyone. Something that will be tested when they face the Browns and Ravens in the next three weeks. If they can navigate their way to at least one win from those two games the remaining schedule holds few challenges giving them the perfect opportunity to claim the division title for the first time since 2009.

The week 15 face off with the Chiefs may well be the crucial deciding factor when we get to the final standings. I have the Chiefs just edging that game, handing them the division title courtesy of a better divisional record over the Chargers. If the Bolts can match their week 3 performance and topple Patrick Mahomes they can claim the title.

Five titles in as many years have made for good times in Kansas City. With Patrick Mahomes under centre, they have made winning a habit and even from the most unlikely of positions. So losing two tight contests in the first three weeks of the season definitely gives cause for concern.

With the other three teams in the division looking stronger, the Chiefs will need to be faultless in the remaining weeks of the season to continue their title winning streak. But with a remaining strength of schedule at 0.643, the Chiefs have the toughest remaining stretch in the NFL. Kansas City will need to get back to winning habits quickly as they have tough games coming with the Bills, Packers and Cowboys all visiting Arrowhead stadium.

Following those I have them winning their final six games to finish 12-5 and winning the AFC West for the 6th year running. Any slips up though will open the door and any of the other three teams will surely be ready to pounce should the Chiefs stumble.

If you enjoyed this please drop us a follow on our Facebook page and enjoy some of our other in depth reviews of players and teams.

Madden 22 Rookie Face Scans… Or Not?

Does The NFL Need VAR?